The store will not work correctly in the case when cookies are disabled.

We use cookies to make your experience better. To comply with the new e-Privacy directive, we need to ask for your consent to set the cookies. Learn more.

Our commitment
to the planet

Give back to the Earth a little of what it gives us each day.
We believe in responsible beauty that respects the planet and the people who inhabit it.

Since 2012, Caudalie has been a member of the "1% for the Planet" network and thus contributes 1% of its worldwide turnover to organisations working to protect the environment.

As the top European contributor and top beauty contributor worldwide, Caudalie will have planted over 8 million trees in 8 countries by 2021.

Because it’s the fastest and most efficient way to protect the environment and support local communities. Planting trees allows us to:

Our actions around the world 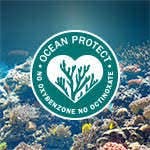 In the last 25 years, more than 55 million hectares of forests – covering an area the size of France – have been cut down in Brazil. The regions targeted by our reforestation projects are located in the states of Piauí, Alagoas and Pernambuco. These regions practice extensive ranching and overgrazing has devastated the land. For 30 years, the Nordesta organisation has been combating the disappearance of tropical forests through reforestation and education operations.

Caudalie supports Nordesta in its efforts to plant 500,000 native trees by the end of 2021 in order to create real forest corridors which will enable the return of biodiversity. The project also includes plans to reintroduce endemic bees which are particularly well adapted to the pollination of local flora: Amazonian Meliponas. In addition to their essential action in the preservation of ecosystems, these bees produce an exquisite honey that local families can sell. 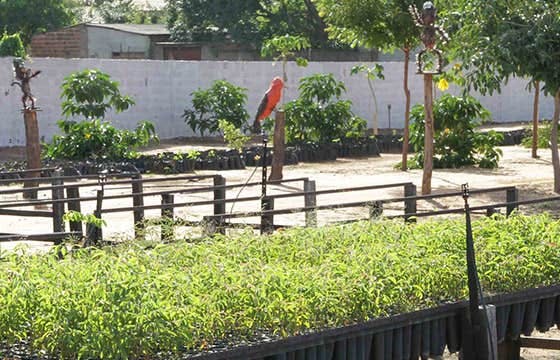 The Andes Amazon in the San Martin region of Peru has lost 40% of its forest land, covering over a million hectares. Biodiversity is under serious threat and the soil has become depleted. Crop yields are decreasing and populations are becoming impoverished. The mission of Pur Projet is to recreate the conditions for sustainable agriculture, particularly for small coffee and cacao farmers who have made the transition to organic agriculture. Caudalie supports Pur Projet to protect the Alto Huayabamba River area and to plant 185,500 trees of various native forest species, including 10% medicinal and floral plants.

Caudalie is extending its commitment by enabling the creation of a medicinal species laboratory in the region of Ucayali in collaboration with the Shipibo, an indigenous people with ancestral knowledge of the plants in their environment. Since 2016, Caudalie has also been committed to the conservation of 100,000 hectares of primary forest as well as forest regeneration by planting two million trees in total. This area was listed by UNESCO as a "Biosphere zone" in April 2016. 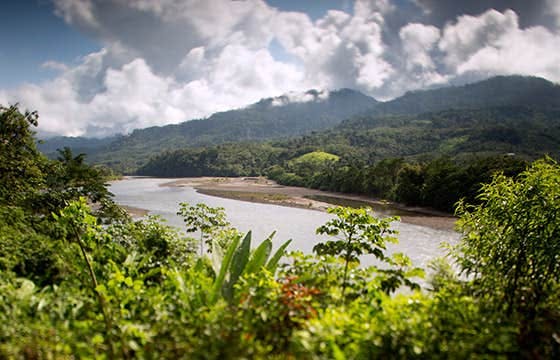 The preservation of community forests throughout rural Thailand is of prime importance. It involves restoring soils that have been devastated by years of intensive monoculture, in particular through agroforestry, the practice of planting trees within and around cultivated fields. Dhamma Rakhsa is a consortium of agro-ecological projects developed with small-scale farmers in the north and northeast of Thailand who are united in a series of cooperatives. The concept is to promote organic agriculture to help the farmers attain self-sufficiency and to enable their ecosystem to regain its resilience. The objectives are reforestation and the maintenance of community forests, as well as the development of innovative agroforestry models combining silviculture with rice production. The diversification of sources of revenue and the self-sufficiency (alimentary, financial and energetic) of small-scale farmers are essential.

Caudalie's support of Pur Projet has made it possible to plant 100,000 trees and shrubs since 2012. The young trees are grown in the Pur Farm tree nurseries and by the groups of small-scale farmers themselves. 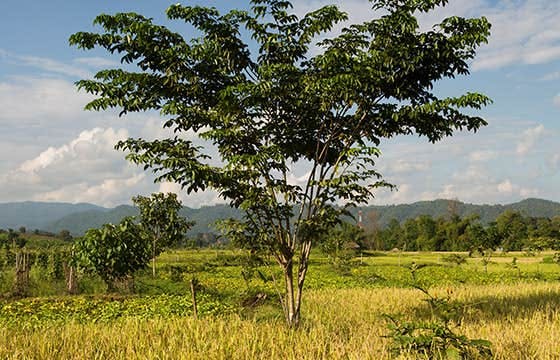 7,000 trees planted in the forest of Sonneberg

Caudalie and PUR PROJET are teaming up for a project to plant trees in the Thuringian Forest with the aim of regenerating, preserving and maintaining forests that have sustained damage. 7,000 trees were planted in 2018. 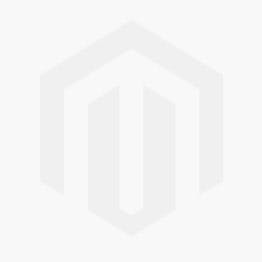 From its snowy mountain peaks to its pine forests and rice paddies, the vast province of Yunnan offers one of the most diverse and lush landscapes in the world and is home to the De'ang, Jingpo and Lisu peoples. Since the 1980s, farmers here have converted nearly all their woodlands into rubber plantations – an area representing one-fifth of the Xishuangbanna and Puer regions – which has led to the deforestation of 60% of the Yunnan's primary forest. This has proved to be a true ecological catastrophe, resulting in the loss of natural habitats for endangered species such as wild elephants. Today only 290 wild elephants remain in the region. 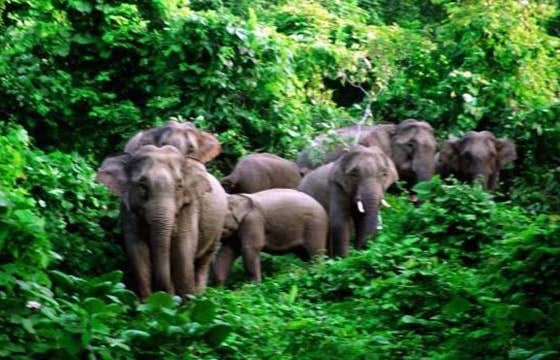 52,000 hectares of forests protected on the island of Sumatra in Indonesia

Indonesia has the highest concentration of plants in the world, as well as a fascinating fauna. It’s also one of the countries most affected by deforestation: 1.8 million hectares of forests are chopped down each year for the illegal wood trade and farming lands are being converted into palm oil plantations. The WWF's missions in Indonesia are to combat deforestation (1/3 of the Tessa Nilo park has been deforested), promote the production of sustainable palm oil, protect endangered animal species and encourage the diversification of economic activities.

Caudalie has chosen to support the WWF in this project, to help protect 52,000 hectares of primary forests, create 1,000 hectares of RSPO-certified oil palm plantations (a sustainable oil palm) and preserve the wildlife corridors necessary for the survival of 225 elephants, 130 orangutans and 65 Sumatran tigers, all endangered species. 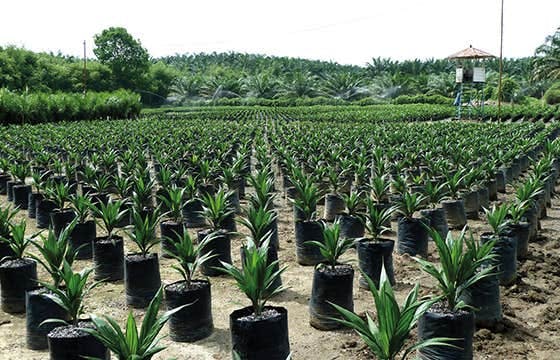 The 268,000 hectares of Copalita-Zimatán-Huatulco drainage basins in the state of Oaxaca are home to 26 of the 34 types of vegetation in Mexico. This unique region, encompassing coral reefs, mangroves and dry forests, is essential to the preservation of local wildlife, which is exceedingly rich in terms of biodiversity. 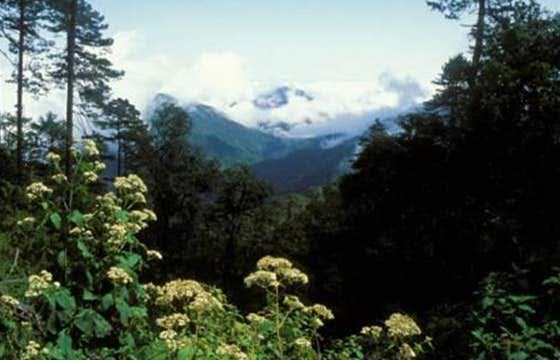 73,000 trees planted in the Brazilian Amazon

The Acre region of Brazil plays a key role in the world's biodiversity: it is home to 70% of all the known species of palm trees in the western Amazon. However, it is threatened by the development of roads and infrastructure, oil prospecting, extensive bovine ranching and fires, leading to a loss of biodiversity and the releasing of millions of tons of greenhouse gases into the atmosphere. Since 2004, the native people of the region, The Kuntanawas, been fighting to gain recognition and demarcation of their land as well as to establish a new model of sustainable forest development. Since 2012, three community tree nurseries have been developed to produce young trees for the reforestation project and to provide organic fertilizers used to nourish the trees. The seeds are collected in the forest to respect the local ecosystem. 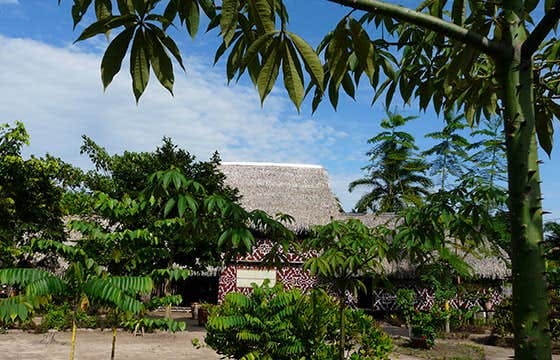 In 2016, Caudalie began supporting the association Arbres et Paysages to plant diverse hedges and scrubs – comprising primarily of the grassland species – around the vineyards of small-scale wine-growers. The creation of these forest corridors has a number of objectives, including: the improvement of biodiversity and biological balance (integrated pest management, wildlife), the windbreaker effect (to protect housing, buildings, crops and herds of domestic animals), an anti-erosion role (on top of slopes and along ditches) and the protection of water quality. Between 2016 and 2017, there were 5,000 plants (trees and shrubs) replanted in the wine-growing area of Gironde. 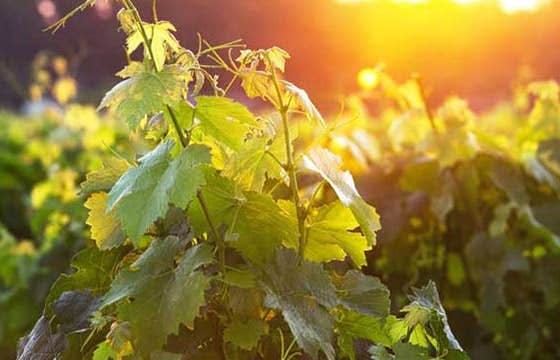 Since 2015, Caudalie has been supporting the NFF with a vast reforestation programme in the United States’ largest national parks, treasures of biodiversity devastated by drought and disastrous fires. In 2018, over 1 million trees were replanted in the states of Montana (Whitebark Pine National Forest), Wyoming (Flathead National Forest), Washington (Okanogan-Wenatchee National Forest) and Minnesota (Chippewa National Forest).

In 2019, Caudalie continued its work alongside the NFF to plant 1 million more trees in the states of California, Washington and Oregon. 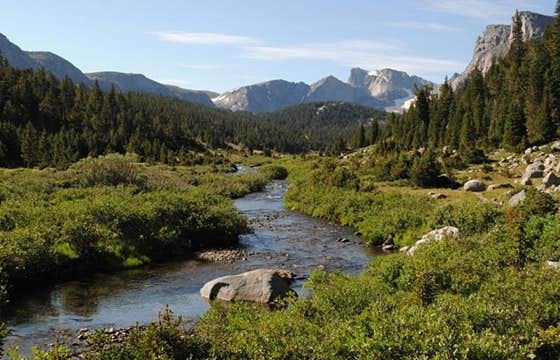 Caudalie is joining forces with CORAL GUARDIAN through a programme that restores and protects coral reefs. In 2019, more than 3,000 corals will be transplanted, restored and protected in Indonesia (Hatamin site) thanks to this partnership. 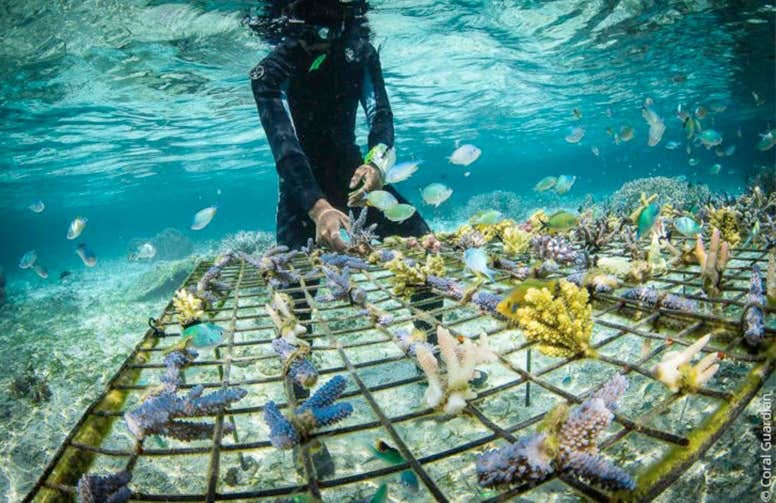 Caudalie is supporting REEF WORLD and helping to implement a certification programme named Green Fins, aimed at stakeholders in the diving and snorkelling industry. This code of conduct developed by UN Environment, promotes best practices among stakeholders who may damage the marine ecosystem. This programme has led to a quantifiable reduction in the threats and damage to coral reefs in the face of a growing threat level due to climate change and pollution from the land. It has been successfully implemented in Antigua and Barbuda through diving practice that respects the environment. 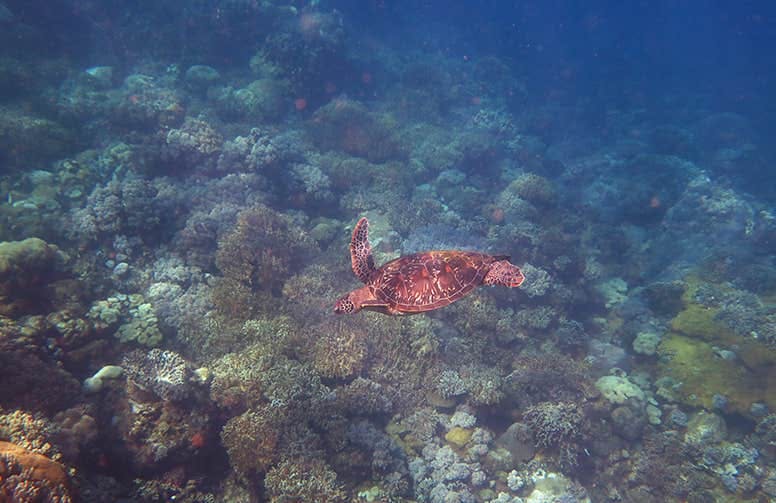 Caudalie has chosen to support SURFRIDER FOUNDATION EUROPE in rolling out the Initiatives Océanes (Ocean Initiatives) programme. This environmental awareness-raising programme aims to improve citizens’ behaviour by bringing them face-to-face with the impact humans have on nature. It operates through aquatic waste-collection networks organised by volunteers on beaches, lakes, rivers and seabeds. 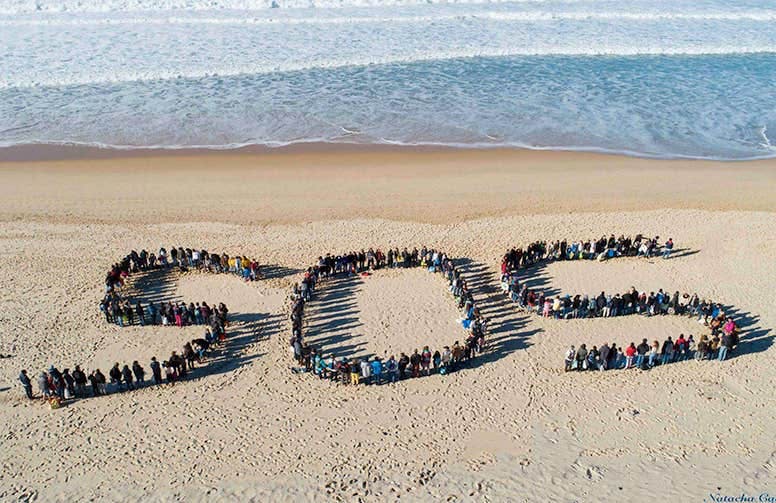 Reconciling environmental protection with the socio-economic development of local communities 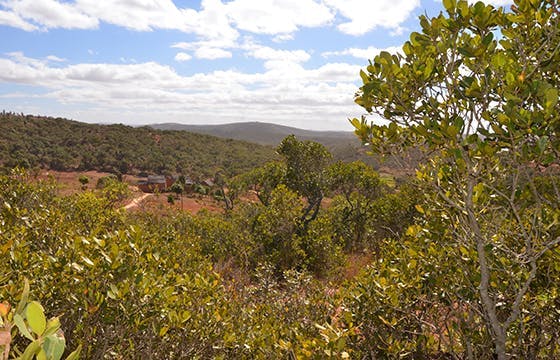 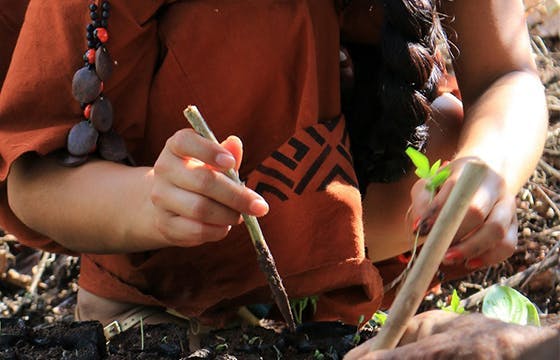 Since it was founded, Caudalie has taken a stance against animal testing, and in accordance with European regulations, it does not test its products on animals. Caudalie uses alternative methods to test its ingredients and finished products, and it does not use ingredients of animal origin. Since 2014, Caudalie has also been supporting the Institute for In Vitro Sciences (IIVS) which develops and optimizes in vitro tests as an alternative to animal testing. As the international leader in the field of scientific research on in vitro testing techniques, IIVS also carries out awareness and education programs to foster the use and acceptation of these alternative methods throughout the world. 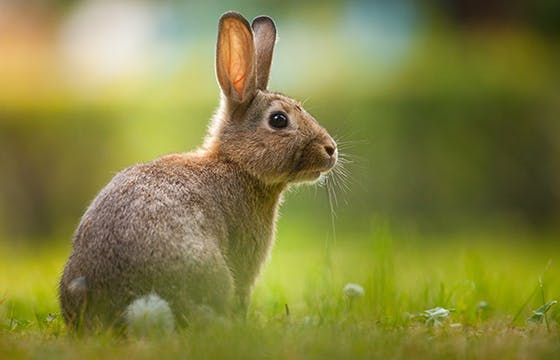 3 free samples of your choice
with every order

Rewards for your purchase
with MYCAUDALIE

Exclusive offers
all year round